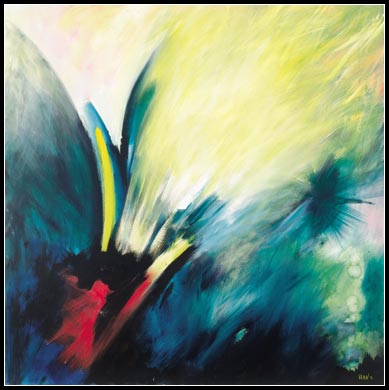 Painter and graphic artist Tomo Vran was born on 29 December 1946 in Ljubljana, but he has lived in Koper since he was a child. He studied painting and graphic arts at the Ljubjana Academy of Fine Arts with Professors Maksim Sedej, Gabrijel Stupica and Riko Debenjak. He graduated in 1972 with Professor Pogačnik. For two years he taught history of art at the Slovenian and Italian grammar schools in Koper and Piran and was the Manager of the Department of Industrial Design at the Institute Tomos in Koper for six years. Since 1980 he has been working as a free-lance artist.
He has been a member of the Association of Slovene Fine Artists since 1972 and the Commissioner of Intart since 1989. He was a member of the Council of Culture with the Government of the Republic of Slovenia for two years, and this year he was elected the President of the Slovene Chamber of Culture. On European scale he was this year elected a Vice President of European Council of Artists. This year he is also the chairman of Lions Club Koper – Capodistria.
He had his first solo exhibition in Trieste in 1981. So far he has had approximately sixty solo exhibtions in Slovenia, Italy, Austria and Germany, and has participated in numerous group exhibitions in Slovenia and abroad. He has been awarded several prizes.

We use cookies on our website to give you the most relevant experience by remembering your preferences and repeat visits. By clicking “Accept All”, you consent to the use of ALL the cookies. However, you may visit "Cookie Settings" to provide a controlled consent.
Cookie SettingsAccept All
Manage consent

This website uses cookies to improve your experience while you navigate through the website. Out of these, the cookies that are categorized as necessary are stored on your browser as they are essential for the working of basic functionalities of the website. We also use third-party cookies that help us analyze and understand how you use this website. These cookies will be stored in your browser only with your consent. You also have the option to opt-out of these cookies. But opting out of some of these cookies may affect your browsing experience.
SAVE & ACCEPT